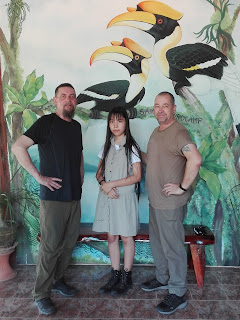 Day 1. Our first stop was at the Pak Thale Shorebird Site for some of Matt’s special targets.  We arrived at first light and began our birding on the track leading to the old pump shed. Many species were present as usual, including; a good size flock of Caspian Terns, Curlews and Whimbrels, Lesser and Greater Sand Plovers, Pacific Golden Plovers and Long Toed Stints among many others. We scoped the flocks left and right up and down the track in search of the Spoon-Billed Sandpipers, but none were present among the Curlew, Broad-Billed, Long-Toed and Red Necked Stints.
We headed to the concrete road up to the view point next to try our luck. In the first salt pan, amongst nice group of feeding Spotted and Common Redshanks and Common Greenshanks was a lone Nordmann’s Greenshank.  The Nordmann’s Greenshank was one of Matt’s big targets, so as expected he was over the moon…
In the next salt pan up there was a growing flock of Stints, mainly Red-Necked. As we scoped, more and more birds arrived, but still no sign of the Spoonie. Then I got one, straight on staring straight at me. I called to Matt quickly to look through my scope, but just as he began to move the whole flock was spooked by something and took flight. As the morning wore on, we continued racking up the numbers. The flocks returned, but we didn’t manage any more views of the Spoonie that morning.
At lunch time we decided to call it a day and headed off for Kaeng Krachan NP. We arrived at Samarn Birdcamp at around 1pm, checked in, grabbed some lunch and headed straight to Luung Sin’s Pond.
The afternoon session proved really fruitful with some great birds dropping in to bathe and drink. Some of the highlights included Large and White-Browed Scimitar Babblers, Banded Bay Cuckoo, White-bellied Erpornis, Brown-Cheeked Fulvettas, Racket-Tailed Treepies and Tickells’ Blue Flycatcher. Although they were seen that morning, no Siberian Blue Robins showed up.
We headed back to the resort around 5:30 for some great food and refreshments and a well-deserved rest.
Day 2. The next morning after breakfast we headed straight into the park for what turned out to be another great day’s birding. First stop at around Km 9, Black-Thighed Falconets perched high up on a dead tree, Common Flamebacks, Dollarbirds and Green-Billed Malkoha all showed nicely. We birded along the access road getting more and more species including a Crested-Serpent Eagle posing nicely on a tree before arriving at Ban Krang Campsite.

From the campsite we continued birding along the road between the streams getting even more great birds in the bag… Banded and Dusky Broadbills showed well, a fantastic Orange-Breasted Trogon sat a few feet away from us, 3 Black-Naped Monarchs sitting on nests and a pair of Black-Backed Kingfishers were observed starting to burrow their nest.

After lunch we headed up to Panoen Thung to try our luck. Long-Tailed Broadbills were very briefly seen and a White-Browed Piculet and Silver-Breasted Broadbills made the drive worthwhile among others.
Back at the resort for the evening, I made a change to our plan. We had planned to hit up another water hole the next morning, but I decided to go back to Luung Sin’s in hope of seeing Siberian Blue Robins, a really big target for Matt…

Day 3. The following morning, we got there just after first light and the first bird ???  A sub-adult male Siberian Blue Robin. Well, what a start… at least 4 other Robins showed, males, a female and sub-adults putting a big smile on Matt’s face. Other birds of the morning included: Kalij Pheasant, Scaly-Breasted Partridges, Yellow -Rumped Flycatcher, a distant Bar-Backed Partridge and Greater and Lesser Necklaced Laughingthrushes.

After a spot of lunch we headed back to Matt’s resort, where he would continue a couple of day’s solo birding before heading back to Bangkok.
A thoroughly great 3 days birding with Matt, a really great guy and a good friend. Hope to meet up again someday for the next adventure……


Another trip with Ramesh and his good friend Chalinda to Kaeng Krachan was on the books for the weekend.  We met up at Samarn Birdcamp at 6am on the Saturday morning and headed straight into the park. I opted to begin our morning along the access road at around the 8-9km mark. The first bird of the morning was a Common Flameback Woodpecker which is always a good omen for Ramesh. He has always told me, seeing a woodpecker as his first bird is his sign of great things to come….
We immediately latched on to great sightings of a male Banded Kingfisher along with a Black-Thighed Falconet. A little further along the road an Asian Emerald, Violet and Drongo-Cuckoo all showed well in the same tree.


Before reaching Bang Kran campsite we had already notched up a great number of birds including 5 lifers for Ramesh. As it was Chalinda’s first birding trip to Thailand, many more were lifers for him. Other highlights along the road included Black and Red Broadbills, Black and Yellow Broadbills, Banded Broadbills, Great-Slaty Woodpeckers, Asian-Fairy Bluebird, Black-Capped Kingfisher and the majestic Great Hornbill amongst many others.

After lunch we headed up to Panoen Thung where Long-tailed Broadbills were busy constructing their nests. At the top at the ranger station and viewpoint, things were pretty quiet given the amount of traffic as it was a weekend..
Sunday morning we headed back into the park for a few hours and managed to notch up a fair few more birds, including; Velvet-Fronted Nuthatch, Ashy & Swinhoes Minivets, Tickell’s Brown Hornbill, Black-Naped Monarchs, Rufous-fronted Babblers and Silver-Breasted Broadbills.


On the way out of the park one last great sighting was a Grey-Faced Buzzard perched on a post as a Crested-Serpent Eagle soared overhead
As always a great couple of days birding with great friends, Ramesh and Shalinda… Two great guys I wish to bird with again sometime soon..