Saturday morning I met up with Ray Pearce to hopefully get some decent shots of the Pied Kingfisher at Bang Ban in Ayuthaya. Almost as soon as we got there, a pair were to and fro, busy burrowing into the river bank making their nest. They were a little far off for any decent shots, and we were shooting directly into the rising sun, so I decided to go back to the truck for my own hide and move further up the bank.


Ray joined, sitting behind a blind and we trained our lenses on a branch overhanging the river a few metres away. The Pieds were still busy coming and going, but we both wanted that special shot on the branch. Waiting, for what seemed like about 3 hours with nothing playing ball, I decided to see if there was a better spot to shoot the nest builders. That was when it happened!!! Literally, just as I stood up and took four steps, IT HAPPENED!! A pair of Pieds landed on the branch 2 metres from my lens.         Dam, If only I had waited another 30 seconds, I could have been getting those shots we were craving… Instead the male and female were staring straight at me with no camera…..  The trauma just left me thinking “Never Get out of the Hide”, “Never Get out of the Goddam Hide”
An hour or so later, one kingfisher made a brief stop on the branch, giving the chance to rattle off 3 three shots, and then he was gone. 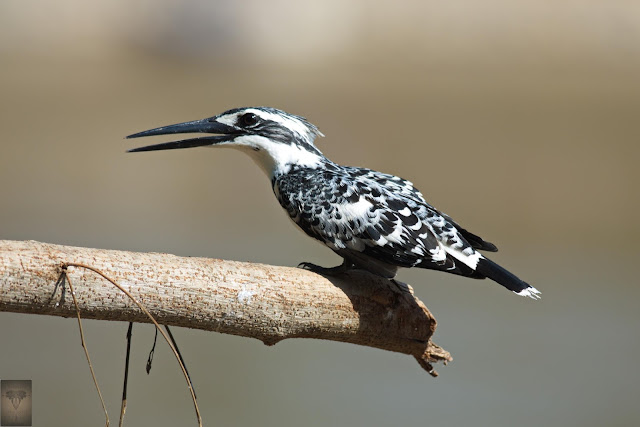 
If anyone would like to join me next time drop me a line at thaibirdspot66@gmail.com  or leave me a comment at https://www.facebook.com/ThaiBirdSpot/
Posted by Thaibirdspot at 1:36 PM No comments:

The following Monday was work again, so I decided to leave early again to have another look around my local patch. This time was much more productive and was probably one of my best days. First was my second ever sighting of a Common Kestrel, followed by Brown Shrikes, my first Stonechats of the year, a large flock of Common Terns, a fly past of 14 Painted Storks. Then a drive down “Kingfisher Lane” turned up 8 Common Kingfishers, 4 White-throated Kingfishers and my first 2 Black-capped Kingfishers of the year. Also along the lane, a Yellow Bittern, Grey-headed Lapwings, Blue-tailed Bee-Eaters and White-breasted Waterhen were seen. Around the corner, along the rice fields, one field was being worked and it was full of Pond Herons, Egrets and surprisingly another group of Painted Storks. A raptor, which I think was either an Eastern Marsh or Female Pied Harrier circled overhead and lastly a Purple Heron passed by. What a fantastic afternoon and all in just over 2 hours!!!

Tuesday, as promised to my daughter, a trip to the beach was the order of the day. I wasn’t going to let the opportunity of driving the “scenic” route to Cha-Am through Pak Thale and Laem Pak Bia get away. More Painted Storks and I lost count of how many Black-capped and Collared Kingfishers were seen along the road. Sadly they were all “wire shots” so I didn’t bother with any pictures. After 3 nice days at the beach with seafood and beer we headed back the same way. Not so many Kingfishers were about, but 4-5 Spot-billed pelicans circled around Laem Pak Bia. An hour at Pak Thale turned up more Painted Storks, some of the usual waders and a Black-shouldered Kite happily feasted on a freshly caught rodent. Sadly I didn’t find any Spoonies.


My final day before getting back to work was a couple of hours around the local patch again. Many birds were observed again, Common Kingfishers and Blue-tailed Bee-Eaters were the stars for some cracking shots..   Well that’s it until Christmas/ New Year holidays. That will surely be a return to Mae Wong for the elusive Crested Kingfisher.

Posted by Thaibirdspot at 11:55 AM No comments:

So, with two weeks break approaching and the truck just about finished, I had made it my plan to have as many trips out as possible.. My first day off was Monday, but still had to work in the evening, so I left a couple of hours early to check out my local patch. Sadly nothing much to report. Tuesday morning, 3:30am and I was off to Mae Wong. I arrived at around 7:30 to be greeted by the usual Red-billed Blue Magpies at the Ranger station. As much as I tried, I just couldn’t get that shot that I wanted. I have seen so many great shots of these awesome looking birds, but they will just never stay still for me.

Up to Chong Yen, the road was under construction and looks to be re-surfaced soon. About half way up, I saw my first Kestrel and got a few shots. As I took a look in at Khun Namyen, a flock of Rufous-necked Hornbills passed over in the distance. No chance of any pictures, but things were looking promising… A single Blue Rockthrush posed nicely for a few shots. I stopped to take a quick look at the hide just before Chong Yen, but it had been removed and the area is now really overgrown, although there is still room to put your own personal hide.

Up at Chong Yen, I headed straight to the ledge behind the Ranger station for the Grey Peacock Pheasant. First out was a Buff-breasted Babbler and then after about 30 minutes a female Peacock-Pheasant appeared.  She didn’t stay around for long, and soon disappeared back into the undergrowth.
Rain had been threatening all morning, so I opted for a drive back to Khun Namyen and do some birding along the road. Pretty much as soon as I got down there, the heavens opened!! This was really no fun. I tried birding from the car, but it was really a complete washout..

I headed back to Chong Yen, where surprisingly it was still fairly dry and spent the rest of the afternoon in my hide on the ledge. Black-throated and White-necked Laughing thrushes were the only birds to show up, but I managed to get some cracking close range shots. A Green Magpie was calling and I caught a quick glimpse, but he wouldn’t play ball to show himself. As evening drew in, I decided to head back down to the Headquarters campsite for the Crested Kingfisher in the morning. Also the Kun flies were having fun biting me!!

I set up at the campsite, cooked some curry up and settled in for the night in the back of the truck. It turned out it was really more comfortable than I had expected, until about 1am, when the rain blasted me in the face through the window, so I had to close it, which made it a little uncomfortable with the humidity.
Up before sunrise, a coffee and a bite to eat, then off in search of the Crested Kingfisher. The river was flowing really fast and was difficult to get to the places I had seen them before as the rapids were very strong. I spent a couple of hours sitting it out and looking, but nothing showed.


I decided to head back home and call in at Huay Kha Kaeng Wildlife Sanctuary on the way back. I arrived there at about 10:30am and got straight to work looking for Black-headed Woodpeckers. There were many Rufous Treepies and Flameback Woodpeckers, but again my targets were not playing ball. I saw and heard many Black-headed, but they were always distant and wouldn’t allow me to get close. I left the park around 2pm. On the way out a Hoopoe landed right in front of me, crest up, but again he saw me before I even had the chance to pick up the camera. I arrived back around 6pm and finished the trip off nicely with a few Leos!!
Posted by Thaibirdspot at 11:39 AM No comments: